"All this new technology
will eventually give us new feelings
that will never completely displace the old ones,
leaving everyone feeling quite nervous
and split in two."

TOPOGRAPHY is a Bitsy game about online friendships, the golden age of tumblr, closeness and closure.
Originally commissioned by the Sydney-based online arts platform Running Dog, this game was released in October 2020 for the special issue LIVE STREAM NOW.

instructions:
- use wasd or arrow keys to move and interact.
- click on the title screen at the beginning if it’s unresponsive at first.
- sound doesn't work on the itch desktop app, please play the game in a browser.

Made me remember some similar experiences on the old internet that ended with a happy end. I love it

I may be dumb. How do I 'interact' with arrow keys? The cursor is moving, but nothing is happening no matter where I hover.

EDIT: why is it that I always leave a comment, and then figure it out a few seconds later. I'm still confused about the first message though because I can't read what they send me lol but oh well

why would you want to read what they sent?

Wasn't that the game? I thought I missed dialogue, I saw a text I just went for it LOL but I couldn't figure out how to read the text on the phone screen and eventually I ended up going to the typing thingy but then it started sending the other message and I thought 'help I missed something'

But I may have just misunderstood

you didnt miss dialogue it's like that on purpose.

Thank you, seems I misunderstood then ^^ I thought I did something wrong LOL but then again when I play a game I want *all* the content that I can get so I'm always afraid of missing something. Thanks for correcing me!

thank you for this, it's a very beautiful game. the sound design is so simple yet so perfect. and the pixel art and limited color scheme bodes well with the nostalgic theme. you really managed to encapsulate into a few minutes my entire teenage experience on the internet, as well as some of the longing for that naivete and innocence. our experiences are always more universal than we'd like to think.

Where is the sound?

turn up the volume or something idk...

lol alright. are you playing in the browser or through the itch dektop app? i believe the desktop app has trouble playing sound for web games.

I use chrome. I "solved" it opening song on a second tab

okay, it works for me on chrome... not much i can do about it if i cant replicate it. might be something in your browser settings but i wouldnt know!

owie. this one hurt dawg. it might just be that i am playing it at 4:51 am and i am tripping, but this kinda made me want to cry, but not in a bad way. i was never a connoisseur of early 2000's tumblr, but i heavily relate to this game on an emotional level. i found it to be a very deep, and astute representation of a slowly decayed internet friendship, and the numbness and dissatisfaction found therein. Also, its just relatable  for all humans. Sometimes rather than loving others, we want to get lost in them. We want to smother our own doubts and troubles and insecurities by seeing them and BEING seen by them, or at least feeling like you are. We make friendships into fortresses shielding us from the real world. Not many people are brave enough to deal with reality, but this game took it head on (a little ironic i know cause its a game) and highlighted some harsh truths in a beautiful and hollistic fashion. Good a$$ game

kinda have a question about bitsy

how the heck do you actually get it to go from a .bitsy file to a .html?

i tried just changing the file name's ending from .bitsy to .html (stupid,  know, but it was worth a shot) but that made it just pull up the raw game data and nothing more 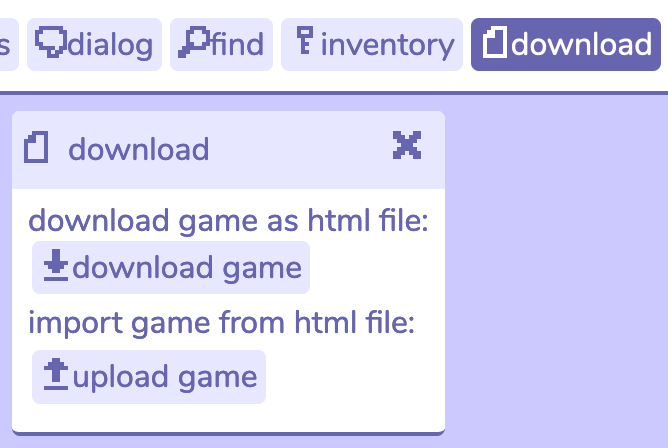 this was so beautiful and somehow comforting.

old tumblr was amazing, it made such a huge impact on me as a person and it was like my favorite place back then and even if it has changed a lot now it still feels like my safe place. i also made an internet friend on tumblr in those years and we're still friends. we've been talking for almost 9 years and it's so cute and heartwarming to see how much we both had grown since then. we've nerver met in person and idk if we would do it someday but i hope that in the future we will still be part of each other's life and continue to be as close as we are now<3

and thank you so much for all of this, the colors, the music, the words, everything is so beautiful

thank you for sharing this!

although the story i tell in this game is quite bittersweet, in real life i ended up moving to a city where a lot of my oldest tumblr friends lived and they’re now my irl friends!

it’s wild to think these are people i’ve known for a decade. because i moved around a lot i never had “lifelong” friends for the longest time, and the internet ended up becoming the constant.

there’s a lot of friends from the tumblr days that i dont talk to every day per se but we still keep in touch and chat when we feel like it. i really like those friendships too!

i hope you take care, and that your lengthy friendship goes on for a while too :)

this was incredibly beautiful and inspiring. this also exposed me to bitsy now and my mind is blown how you've used the engine

Dang. Beautiful in words and visuals.

this was really neat! as someone who spent and spends a lot of time on tumblr (both new and old) i really understood a lot of what was being got at. my only issue is that the white words on the light green background were really difficult to read and really took away from the experience. besides that, great story :)

thanks for the feedback! i'm tempted to rework the colours to make the text more readable but it's difficult to do within the limitations of bitsy itself...

and a bit sad

thanks for this text

I love it. All of your games have a special place in my heart. With its music and beatiful stories, thank you for making them and for your hard work <3

like others in the comments, this hit me right in the feels i have towards an old, very close friendship over the internet. it's been years but i still think about them. i hope they're doing well.

thank you for this <3

omg great work again!!! every time I play your games I become so immersed in the story I forget I'm sitting in my room. You made me realize coding is an art form :) keep up the good work I cant wait to see what you come up with next!

I've had a similar case in the past and it really felt like the protagonist was speaking to me. For a few weeks now, I've been doing a lot of introspection and time-out from the net, realizing that none of it felt quite real. Thanks for sending your message out to the world.

this is breathtaking, truly.

Super well done. This game did its best to punch me in the heart, and I think I would have cried from it, had you only caught me a few years earlier.

This gave me nostalgia for an era I've never really lived through.

It's so beautiful and refreshing

all of your games feel like waking up. thank you, your games have helped me through a lot.

a+. excellent storytelling, excellent sprite work. didn't know bitsy could be used to tell stories like this. i'm impressed.

This has the same energy as Craving for Narrative (2016). Really enjoyed it.

This game is beautiful, thank you for making it

beautiful. got chills throughout. meeting internet friends, or not meeting them, or having them go away forever.... theres apparently no stakes or consequences, experiences purely virtual, yet the feelings are real. i lostcontact with an internet friend and returned to their page years later, to find out they'd passed away suddenly, i still dont even know how to handle that. its like it was never real in the first place... which is really not poggers.

so true about 2010s tumblr, a unique virtual place. part of me comes to itch to try and see if there could be a sense of place in the same way, but its much harder to share, and it takes longer. regardless, thanks for putting this together. i loved it

i love it, thank you.

Thank you for this. It spoke to me.

It made me feel something I didn't feel before

this made me feel a lot of things about an older internet & internet friends who i would have said were my entire world back when we were still in touch but now i don't know where in the world they are or what they are doing.

same here. Many memories revived.
I especially like the music.